By Marcus Hirt and JP Bempel

An Introduction to JFR Streaming

In the most recent version of the JDK a new JFR-related feature was introduced – JFR streaming. It is a feature allowing a developer to subscribe to select JFR data and to decide what to do with that data in the host process. JFR events can also be consumed from a separate process by pointing to the file repo of a separate JVM process – the mechanism is the same.

The new functionality mostly resides in jdk.jfr.consumer. This is how you would open an event stream and start consuming the CPU load with 1 second intervals and the monitor class when blocked to enter a monitor for 10 ms:

The RecordingStream is what you would use to control what is gathered from within the Java process, effectively also controlling the recorder.

Here is another example using the default recording template, and printing out the information for garbage collection events, cpu load and the JVM information:

The EventStream class can be used together with the standard flight recorder mechanisms to gather information from ongoing recordings, even ones being done in separate processes or an already recorded file. Here is an example using the EventStream to get some other attributes of the CPU load and information from garbage collections from within the Java process (needs an ongoing recording):

This is the EventStream interface used to consume and filter an event stream:

The onEvent* allows you to register a consumer for handling the events, either all of the events or by event name (type). The start method kicks off the processing in the current thread, startAsync is a convenience method for kicking off the process in a single separate thread.

Where to use streaming

There are several advantages to JFR event streaming. It is a great way to access JFR data for monitoring purposes. You get access to detailed information that was previously unavailable to you, even from different processes, should you want to.

It also allows you to skip the metadata part of a normal flight recording. The metadata in JFR contains the information about what was recorded, so that you can parse and view data that you may not even know about beforehand. In the case of monitoring a few well known data points, this is redundant information to keep sending over and over again.

Erik Gahlin has a neat example for producing health reports using JFR streaming, displaying pre-aggregation of the top frames for execution samples and allocation, as well as doing stats for some common data points, like GC metrics and CPU load.

Where Not to Use Streaming

This is from JEP-349[2], the JEP where JFR streaming was introduced:

“To consume the data today, a user must start a recording, stop it, dump the contents to disk and then parse the recording file. This works well for application profiling, where typically at least a minute of data is being recorded at a time, but not for monitoring purposes.“

Let’s explore why the JEP differentiates between monitoring and profiling. Some events in JFR are simple data points in time. Some are more complex, containing plenty of constants. For example stack traces. JFR takes great care to record these complex data structures in a binary format that doesn’t take a lot of processing time to produce, and which is still compact.

Some of the JFR events occur quite frequently – for example, a typical one minute recording of data can contain hundreds of thousands of events. The file size for such a recording is typically only a couple of MB large. There is a mix of techniques used to keep the size down, such as using constant pools to ensure that information like method names are not repeated, LEB128 encoding of integers etc.

For profiling you typically want quite a few of these events enabled. JFR was built to emit this data at a very low overhead, and the data is eminently useful to get detailed information about things like why your thread is halting. For example, the stack trace to a place where your code had to wait to enter a monitor, complete with the class of the monitor waited on, the exact duration of the wait, which thread was holding on to the monitor (making you not able to enter), the monitor address and more. Not only that, there may have been other events providing context about what was going on in that thread at the time of the monitor enter, shining further light on what was going on. Events that you may not even know about.

For example, the RecordedEvent class contains a method to get the RecordedStackTrace, which is a List of RecordedFrame. For each event you would walk through, the in-memory object model would be created.

You can externalize some of that cost, i.e. how the process you are monitoring is affected, by using another process to read the data as described above. That would, for example, lessen the allocation pressure in the process you’re monitoring. That is great, for example if you have a very latency sensitive process. That said, you have now created another Java process and put the costs over there (including the cpu overhead of dealing with the memory pressure as well as the memory overhead of running another JVM), typically on the same host. If you can afford to dedicate the memory and pin the event stream reader process to its own processor (cpu affinity), this can be a good solution though. Note that the same can be done for normal flight recordings, i.e. you can stream the recorded data directly from the file repository from a separate process.

For laughs and giggles, here are some benchmarks using just standard JFR to get all the data in the profiling template, compared to getting the equivalent information and serializing it to a JSon-like format using JFR Streaming. In other words, abusing JFR Streaming as a streaming replacement for getting the full JFR dataset. This is of course not what you should be using JFR Streaming for, but exemplifies how wrong you can land if you use the technology in a way it was never intended. We’ll look at the latency of http requests, the CPU time spent and the allocation pressure. We’ll also look at the size of the payload of information extracted. The benchmark is admittedly being a bit extra mean as well, to explore edge cases.

Note that this is a simplified example – we’re not even bothering with extracting the full stacktrace information and re-encoding it for streaming, whilst the JFRs in comparison already contain the full stack traces for all events efficiently encoded in constant pools. We could trade (even more) CPU for trying to bring the streamed data back to a JFR style format with constant pools again before storing/sending it. For serialization we’re simply doing toString() on the event objects, which gives us the events in a JSon-like format with only the top five frames of the stack trace. Including the full stack traces would add quite a bit more overhead to the streaming example.

The benchmark is available in this GitHub repository. It is based on the standard PetClinic application with some modifications to make it relevant to measure overhead in general.

Note: We are using an early access version of OpenJDK 15 in the benchmarks, since we discovered a bug whilst building this benchmark. See JDK-8245120.

The first chart shows the impact on http request latencies: 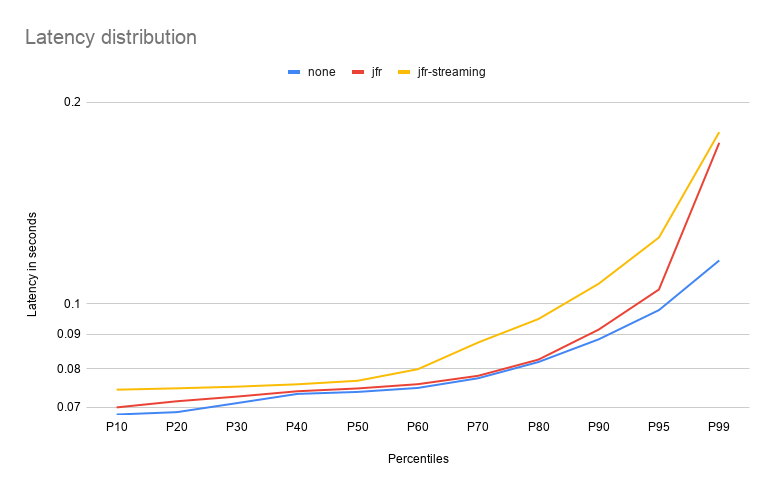 Note: Y-axis is in log scale to magnify the difference.

Next chart shows the CPU consumption. We measure in ticks from /proc/<pid>/stat at the end of the benchmark. This way we have a unique number easy to compare with other runs. It represents the CPU consumed when threads were scheduled on the CPU. 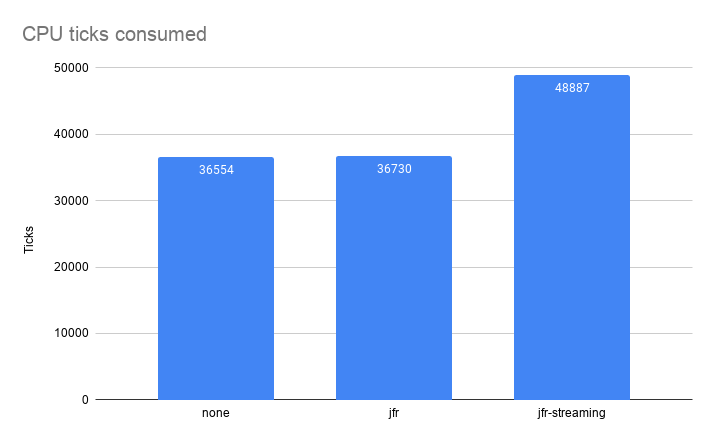 The following chart is the total amount of heap allocated during the benchmark. Numbers were extracted from GC logs. 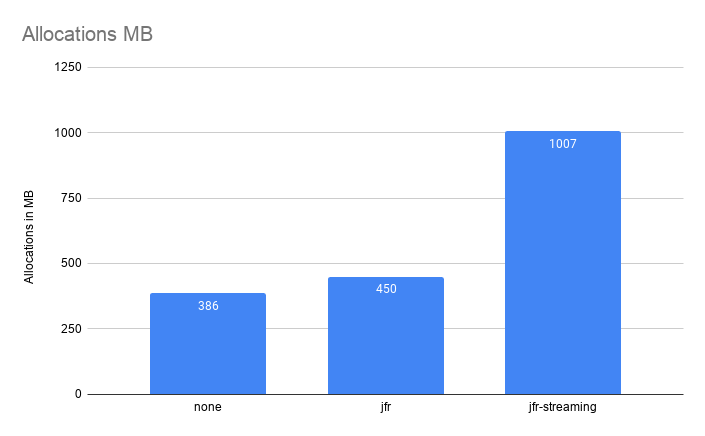 The final chart represents the size of extracted information, as described above: 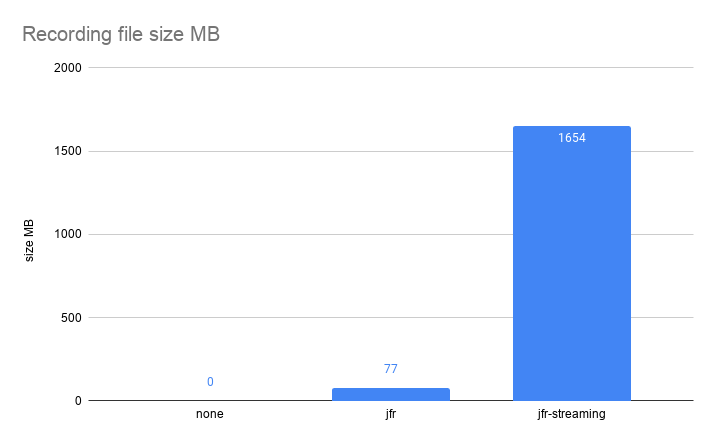 Note that the JFR file contains the full stacktraces, and that the jfr-streaming one is limited to the top 5 frames.

So what is the conclusion of these benchmarks? Not much, except for: “don’t use technology for things it was never intended for”. 😉