Oh my god. The amount of FUD concerning the JDK licensing for JDK 11 is just amazing.

So, unless I’ve missed something, Oracle does the following:

And how does the community react, you wonder? Yep, that’s right. “Oracle is the Devil”, “This is a bait and switch operation” etc. Ad nauseum.

So, this is my personal take on open source: if I like a certain open source technology, and it helps me in my work, I support it. Either by contributing, or by paying (gasp) money for it. Especially if I would like the technology to thrive in the future. Technologies that are not supported, tend to die and be forgotten. I have personally, for a very long time, paid a yearly contribution of 35$ to Eclipse. And that is even though my team, and countless of other teams at Oracle, have contributed to various Eclipse projects over the years. And, no, Eclipse does not provide me support for it.

If anyone would like to catch up with me at Code One, here are some specific times where my location is known in advance. 😉

Note that the last few years, the HoL has been full – it may be a good idea to register for it early. Especially now that JMC/JFR is being open sourced (JDK 11, JMC 7).

Looking forward to seeing you at Code One!

Here is a link to the sessions in the content catalogue.

This is going to be a short blog post, because it is past bedtime and I’m frankly pretty beat. Just wanted to say thank you to everyone who helped open source Java Mission Control in the relatively short period of time it was done in.

So a huge thank you to everyone on the Stockholm JMC team: Klara Ward, Ola Westin, Henrik Dafgård, Erik Greijus and Per Kroon. And to Dalibor Topic, who had the thankless job to go through all the source and built artifacts checking on, among other things, licenses and copyrights. Also thank you to Donald Smith for handling the internal license approval process, and Mark Reinhold for advice. Also, a big thank you to Guru, who is prepping to start building Oracle binary builds of the OpenJDK project. And to Iris who published the repos and set up the project on OpenJDK. And to everyone who I’ve forgotten to mention, since my brain is no longer really functioning at 2 a.m. You guys rock!

The repositories are available here:

We also have a slack at https://jdkmissioncontrol.slack.com/.

If you have any questions, don’t hesitate to ask!

So JavaOne 2017 has now come and gone. This year it was a pretty great one! The Java keynote was IMHO the best one in years, with plenty of great announcements and interesting content. The sessions I managed to attend were also very high quality. Not to mention the dinners and the parties.

One of the sessions I did this year was a hands-on-lab on Java Mission Control 6 and Java Flight Recorder in JDK 9.

Since it was full, and since people who could not attend have asked for it, I promised to put the HoL on my blog. Well, here it is!

There are three files:

Please let me know if you find any errors in the labs, or if you get stuck!

As you probably already know, JFR is on the road to be open sourced. The plans are being drawn, and if everything goes well, this could happen as early as in JDK 10 (JDK 18.3). No promises, and please do not give anyone a hard time if this doesn’t work out. Know that we tried. Anyways, what we did recently do was to release JDK 9, and there are a LOT of exciting stuff happening for JFR already in JDK 9.

Let’s dive into it…

Yep. The JFR APIs in the JDK are supported. This means that unlike all my other posts on JFR related APIs, this post does not contain any disclaimer for using these APIs. They are supported! By Oracle! Woho!

On the sad side, this also means that the APIs have changed package, and signatures. On the plus side, they have been immensely enhanced for readability, performance and ease of use.

I will group the API as follows:

Now, there is an advanced API for consuming recordings included with JMC. That API sports internal iteration, aggregation in various forms, JDK 7, 8 and 9 JFR file compatibility, JDK 7 and later execution compatibility, POJO (no weird dependencies), rules evaluation, and more. This API will also be open sourced, and I will discuss it in a later post.

The API for creating and recording your own events is very simple. All you need to do is to subclass jdk.jfr.Event.and annotate the fields you wish to record with jdk.jfr.Label.

It is good form to provide a description for your event class and for non-trivial attributes. Here is an example of an event from a JUnit plug-in for JUnit 5 (that I have not released for JDK 9 yet):

Other important annotations are, for example, the annotation for providing information about the content. These annotations are put on fields to explain to tools how to interpret the data. For example, Java Mission Control would be able to properly render timestamps and durations properly, if the appropriate @Timestamp and @Timespan annotations were used. I have provided a quick overview of some of the most commonly used ones below:

There are other annotations worth knowing about such as these:


This is by no means an exhaustive list of all the annotations, and as soon as I find out where the javadocs will end up, I will add a link to them.

Note that the programming model is simpler, compared to previous releases. There is no Producer with which you need to register the events. The life cycle of an event simply follows the life cycle of the event class. Also, new event types are enabled by default. As a matter of fact, all the defaults for an event type can be configured using annotations. Also, compared to previous releases, you do not need to explicitly reuse event objects and keep event tokens around; care has been taken to ensure that events on the hot path should be easy to scalarize.

API for Controlling the FlightRecorder

In JDK 9 there are actually two, related, APIs for controlling the FlightRecorder. Just like before, there will be a JMX API. This API provides similar capabilities as the JDK 8 JMX API, but the API has been cleaned up and moved from the com.oracle.jrockit domain to the jdk.management.flightrecorder domain. 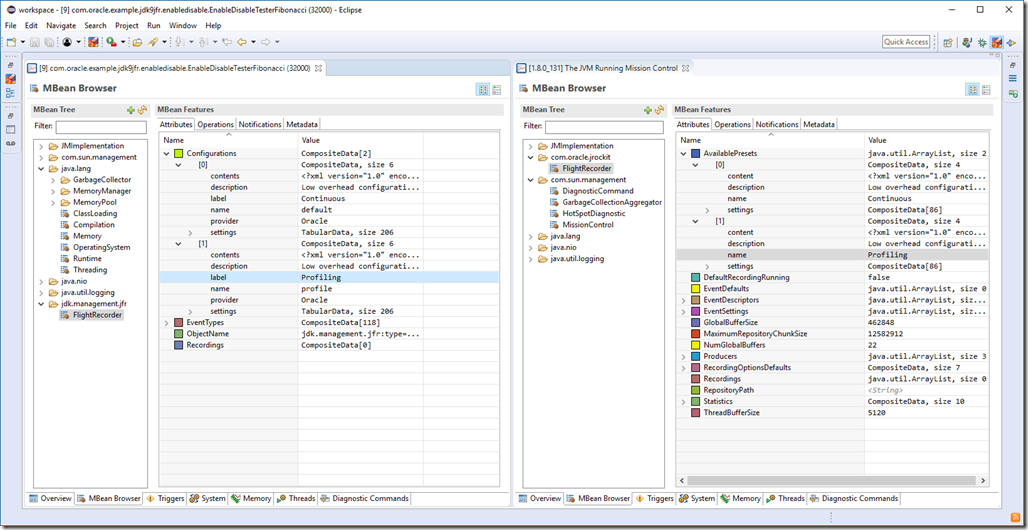 I will not spend much time on the JMX API. A good example on how to use the different versions of it will be provided in the JMC source, once it is open sourced.

Another addition is an easy to use local API for controlling the Flight Recorder. Here is an example which starts a recording, records the calculation of the first 50 Fibonacci numbers and writes the recording to disk:

As I mentioned in the beginning, there is another parser included in JMC, with supported reading JDK 7, 8 and 9 recordings, and which supports internal iteration, aggregation in various forms, JDK 7 and later execution compatibility, and rules evaluation. It is still POJO, so it can be included into anything. Which parser to use depends on what you are trying to accomplish.

Here is an addition to the previous example which also reads the produced recording using the Parser built into the JDK, and which then writes out information from the captured events on stdout:

Other Improvements to JFR in JDK 9

Here is a list of some other improvements to JFR in JDK9:

Here is a graphic (provided by my excellent friend Erik Gahlin at the Oracle JPG Serviceability Team), which shows some of the areas where JFR has improved in JDK 9:

Let’s take them in order:

So, not only have the APIs become easier to use, and more comprehensive. JFR has also become significantly faster. That is a bit of a feat, considering that it wasn’t very slow to begin with.

This blog provided a quick introduction to JFR in JDK 9, with some simple examples.

Here is a link to the full source for the examples: source_jdk9_jfr_examples.zip

Though I feel truly honored to be one of the Featured Speakers at the JavaOne 2017 home page, I wish someone could have warned me in advance. That picture…😎😱 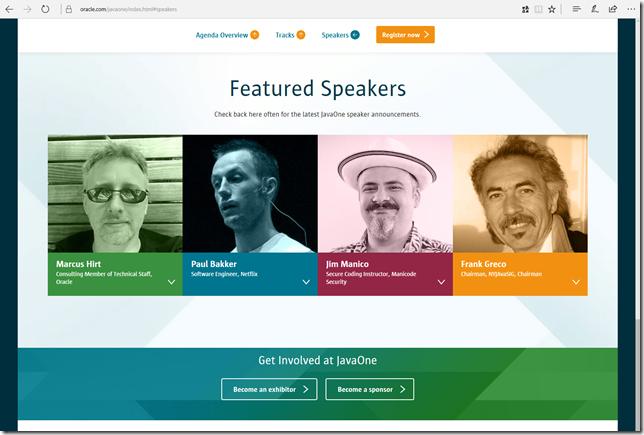 Anyways, clicking on the link from from my little speaker square, the one saying “See all sessions from this speaker”, currently shows me as having one talk. A Hands-on-Lab. This is not correct.

Here are the sessions (at JavaOne and OOW) where I will be speaking this year:

Looking forward to seeing you at JavaOne/Oracle Open World!