The latest version of Java Mission Control was released a few moments ago, together with Oracle Java SE 8u40. It’s a minor release; most of the development is taking place in the upcoming major version of JMC, but there are nevertheless some interesting features and fixes in this release. I have selected a few of the highlights below.

If you forgot to enable flight recorder on the command line (in 8u40 and later), all is no longer lost – JFR can be enabled dynamically, after the fact that the JVM process has been started! If you try to connect to a JVM which has not enabled JFR, you will be presented with a dialog like this: 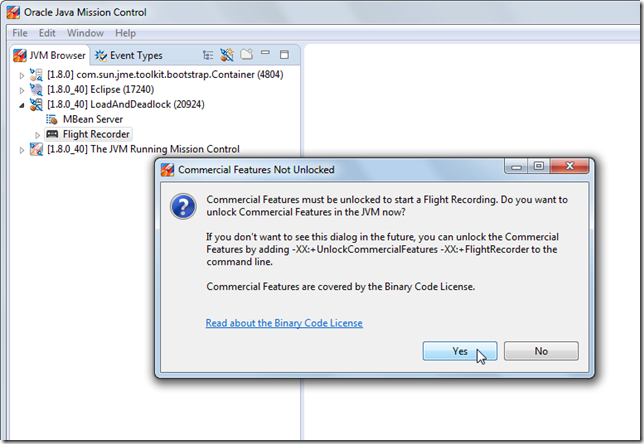 Clicking yes will dynamically enable the Flight Recorder and allow you to start recordings.

Up until now we have based the JMC RCP application on Eclipse RCP 3.8.2. The reason was due to a performance problem when running with Eclipse RCP 4.x. For JMC 5.5.0 we worked around this problem, and are now using Eclipse RCP 4.4. As a result, JMC will also feel much snappier when running inside of Eclipse, as a set of Eclipse plug-ins.

Upgrading to Eclipse 4.4 affects many different parts of the stand-alone JMC application. For a starter, plenty of bugs have been fixed in the platform over the past years. Fixes that JMC can now take advantage of. Also, various enhancements done to the platform are now available, such as themes: 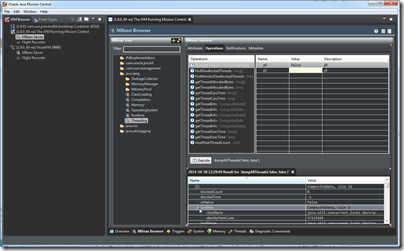 It is supported to run JMC in the very latest version of Eclipse, and the speed should be comparable to running in Eclipse 3.8.2.

JMC can be used as a set of plug-ins in Eclipse. This has the added benefit that you can jump to your source code from anywhere we display a class, or a method frame or similar. There is also an experimental update site from where you can install extra JMC content, for example the WebLogic Server plug-in, or the D-Trace plug-in. Previously all the JMC plug-ins were unsigned. Installing them into Eclipse required you to accept to install unsigned content into your Eclipse:

This is no longer the case.

Looking at recordings from applications running in implementations of dynamic languages making heavy use of Lambda Forms will be much friendlier. Say, for example, a recording of a Java Script application running on Nashorn. Just like the JVM by default hides @hidden annotated Lambda Form methods, so will JMC. If you still want to see them in all their glory, the setting can be toggled in the preferences. 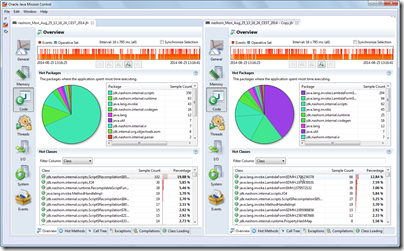 And here is what a stack trace can look like with them visible: 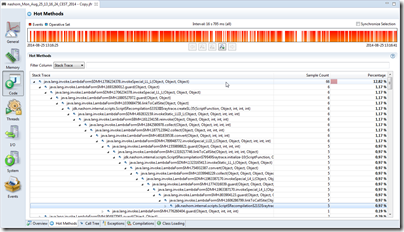 Suffice it to say, you will usually want to leave them hidden… 😉