So, instead of just playing around for fun, I decided to actually do something useful. In this case I wanted a little remote sensor station, which I can plug-in wherever I want to, and communicate with over http over GSM.

First of all you need to bunker up on as many DS18B20s and as many AM2302/DHT11/DHT22’s you think you’ll need. There are plenty of articles out there on how to configure them. I decided to do it a tiny bit differently to most examples by hooking up the power pin to the 5V rail (both since the specs indicate that you can run longer cable lengths if you do so and since more current can be sourced from the 5V rail). The data is pulled up to the 3.3V rail, just like in all the examples. Note that a bunch of DS18B20s can be hooked up in parallel and communicated with over a single GPIO port. Also note that this is NOT possible with the DHT sensors, which will need one GPIO port per sensor.

Ultimately I decided to have two (optional) DS18B20s and one AM2302 on my board, and I used an Adafruit Perma Proto to hook it all up. Mostly because they are pretty. 😉 To connect the AM2302, I used a Molex jumper assembly, and for the DS18B20s I decided to use RJ-11s. I can highly recommend the RJ-11s! The connectors take a bit of space on the card, and they do require you to mutilate the poor Perma Proto a bit (drill larger holes), but attaching/removing sensors is a joy. Here is a picture of the thingy with all the sensors connected: 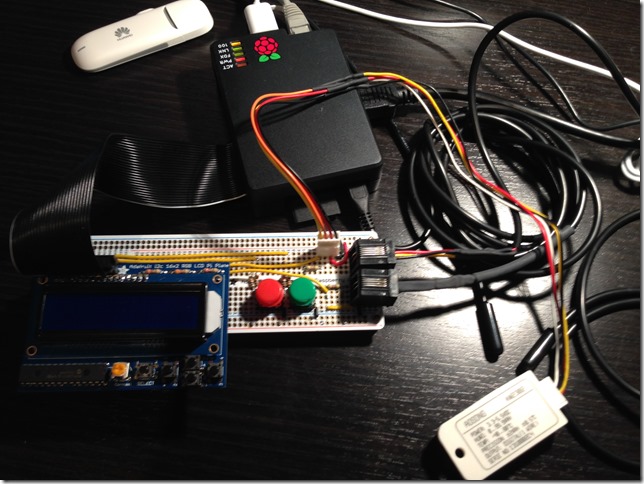 In my build I will also use an LCD shield for local control and readouts without necessarily having access to a monitor. I also added a few buttons and LEDs, mostly to satisfy my youngest son.

I guess those could come in handy for diagnostics later. 🙂

For the DS18B20 there are two modules available which will expose all the DS18B20s as files under /sys/bus/w1/devices. Simply add w1-gpio and w1-therm to /etc/modules. Note that you must have the DS18B20s on GPIO port 4 for the module to work.

For the DHT sensors there is no module, but I’ve adapted the Adafruit native library described here, to create a native library for Java. Read the README.txt provided in the zip for more information.

Once you have added the modules and put native libraries on the library path, there is only a tiny bit of configuration left to do. The library should automatically discover all DS18B20s you have. If you only happen to have one AM2302 on GPIO-pin 22, you are good to go. If not, you need to edit the property file dhtsensors.properties in the w1.jar to correspond to your setup:

If you have no DHT sensors, simply comment out the lines. If you have more than one, simply add two more lines for every sensor, indicating which type and what pin they are on. For example:

To test that everything is set up properly, simply run:

Note that Pi4J isn’t needed on the classpath. We’re relying on the native library and the w1-gpio mod to provide the necessary interfaces.

The output should look something along the lines of this:

The code is very simple. To get all the sensors, do:

To print the sensors like in the example, do:

That’s really all there is to it.

A simple Java library to read a few different kinds of temperature and hygrometer sensors was introduced.